Winners purposefully waited to check tickets to avoid disappointment, but were met with a much bigger shock

ST. JOHN'S, Canada — A couple from Newfoundland and Labrador now possess the bragging rights to claiming the second-largest jackpot in the province's history — $18.2 million (US$13.6 million).

After the Atlantic Lottery announced that the Sat. Sept. 12 Lotto 6/49 jackpot had been won by a lone ticket sold in St. John's, players were kept on their toes while rumors about who won the jackpot started to spread and simmer. Some claimed that the winning ticket belonged to a group of nurses. Some others claimed that it was an electrician who won big.

Finally, at the Alt Hotel in downtown St. John's, the Atlantic Lottery revealed the winners — Nicole Parsons, a human resources manager, and Francois-Xavier Morency, a manager at a shipping company.

Ironically, the lucky winners had heard the news that the lone winning lottery ticket was sold in St. John's, but they purposefully waited to check their tickets to put off a feeling of disappointment. Those low expectations might have exacerbated the shock of winning jackpot.

"I said to my mom the other day, 'The sooner I go check it, the sooner I will know I'm not the winner, so I'm just going to hold onto it for a little longer,'" Parsons told the Atlantic Lottery. "I was hanging onto that dream that it could actually be us. I certainly didn't expect that it would be."

Parsons was the one to purchase the ticket at the Circle K convenience store on Frecker Drive using numbers she randomly selected — 5, 13, 19, 37, 42, and 45, with Bonus number 40. After three days of holding onto the ticket, she couldn't wait anymore and went back to the same retailer to check her numbers. She claims that she never checks her tickets online and always takes them to an in-person retailer.

"I was on my way to the gym when I thought, 'I'm going to have to check it eventually, I guess,'" she recalled. "It was shocking, overwhelming. I was in disbelief when I found out it was a major winner."

Since finding out that her lottery ticket was the one to win it all, Parsons and Morency have had some time to mull over what she and her partner plan on doing with the newfound winnings. Included in those plans is a retirement sooner rather than later.

"With this amount of money and the current situation, there are other families who need our jobs so they can go back to work," Morency said in a press release. "We no longer need that work, so professionally we can step aside and make sure two other people who need them have a job."

The couple's main priority is taking care of their families, spoiling their nieces and nephews, and spending more time with their parents. To make visiting Morency's family easier, they'll purchase a condo in Quebec that is closer to where they live. The couple also looks forward to spending plenty of time outdoors, from camping to hiking to fishing.

Aside from all that, their plans involve other selfless pursuits. Parsons, who is involved with a local non-profit organization, can't think of a better way to give back to people in need.

"I try to make a conscious effort to give my time to a worthy cause and help other people," she said. "I don't know what it will be like to not work anymore, but I am certainly looking forward to having more time to give and help so much more. We should always be giving back to society in some way, so I am really looking forward to that."

Parson and Morency's win is the second Lotto 6/49 jackpot claimed in a month. Raymond Lillington of Dingwall in Nova Scotia won the $17.4 million (US$13 million) top prize in the Aug. 15 drawing.

For selling the winning ticket the Circle K on Frecker Drive will receive a bonus of 1% of the prize amount.

Congrats to the Lucky Winners!

Congrats to the Lucky winners.

Congratulations!   Don't worry about not working anymore...best feeling in the world.

If you are a recovering alcoholic and find yourself having thoughts about going back to drinking after viewing this thread, you should seek help. This could be going to an AA meeting, seeing a counsellor or contacting an addiction clinic right away.

If you are a recovering alcoholic and find yourself having thoughts about going back to drinking after viewing this thread, you should seek help. This could be going to an AA meeting, seeing a counsellor or contacting an addiction clinic right away.

.. however, " some" folks do celebrate any win with a drink. l can't begin to tell you how many lottery winners pictured on LP are shown popping champagne, not drinking bottles containing water. 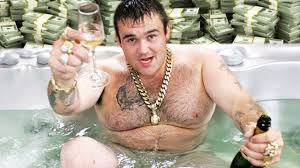