A cyber-criminal has been jailed for nine months for committing offenses against the United Kingdom National Lottery.

The NCA was notified of the attack against National Lottery accounts in November 2016. The customer database affected contained around nine million records.

Daniel Thompson, 27, of Newcastle, and Idris Kayode Akinwunmi, 21, of Birmingham, were jailed for eight months and four months respectively for the attack in July 2018, having used an online application to bombard victims' web domains with thousands of attempts to log in to customer accounts.

The NCA stated that Batson was responsible for using a widely available hacking tool — Sentry MBA — to create a file that launched the attack, telling others they could make quick cash by using the tool against Camelot (which runs the National Lottery) and also giving the username and password of one lottery player to Akinwunmi, who stole £13 from his account before sending Batson £5.

Batson was arrested in May 2017 and, whilst he first denied any involvement in the crime, police officers discovered conversations between him and others about hacking, buying and selling of username and password lists, configuration files and personal details. His computer also contained a conversation with Akinwunmi about stealing the £13, the NCA added.

NCA senior investigating officer Andrew Shorrock said, "Even the most basic forms of cybercrime can have a substantial impact on victims.

"No one should think cybercrime is victimless or that they can get away with it. The NCA will pursue and identify offenders and any conviction can be devastating to their futures."

Eddie Tipton claims he was pressured to plead guilty in lottery rigging scandalNov 14, 2021

Lottery losers could get paid after lottery scam lawsuit settles for $4.3 millionJul 22, 2019

Well he should have taken the Tipton route and got some big bucks....ROFL

Once released- send Thompson back to Scotland, Akin back to Nigeria & Anwar back to Nepal.Problem solved! 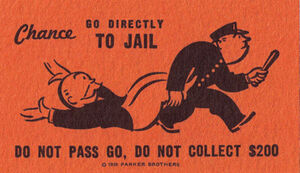 They need to bring back the

live drawing. Get rid of

Well he should have taken the Tipton route and got some big bucks....ROFL

Bleudog101,  I am not ROFL, "Rolling on the floor laughing". If these criminals had not been captured than they would have committed more crimes.

The same goes with Tipton. His crimes would have attracted more criminals if he had not been caught.

The former CEO of the Iowa Lottery, Terry Rich said, "If Iowa had been an anonymous State than Tipton would have committed more crimes."