$338M NJ Powerball winner reconciles with girlfriend who sued him

At least that's the latest story line in the rags-to-riches melodrama of the Passaic bodega owner and his on-and-off, live-in girlfriend who split up after he won a massive Powerball jackpot last spring, wrangled over the money in court, and now have reconciled.

On Valentine's Day, no less, according to Paul Fernandez, an attorney for lottery winner Pedro Quezada.

The revelation Friday followed a court hearing in which it appeared that Inez Sanchez had agreed to drop her lawsuit seeking a share of the $152 million Quezada won and relinquish all claims to the money in exchange for a seeming pittance — not being on the hook for the attorneys' fees Quezada ran up.

The settlement was reached just as state Superior Court Chancery Division Judge Margaret Mary McVeigh in Paterson was set to rule on a motion by Quezada's attorneys to dismiss Sanchez's lawsuit seeking an unspecified share of the jackpot he won in March 2013.

"I wish the parties good luck and a wonderful future," said McVeigh. "I hope this works out for you. Good luck, be happy and find what is most important in life."

Through a Spanish-English interpreter and via questioning by her attorney, Bill Ferreira of Morristown, Sanchez indicated in court she was agreeing to the settlement "for the full reconciliation" of her family and so that she can get on with her life.

Neither Quezada nor Sanchez commented afterward, but the judge's and Sanchez's comments referred to Sanchez and the couple's 6-year-old daughter and her other children having moved back last month into the Clifton home they shared with Quezada before the couple's post-lottery breakup.

Fernandez said Quezada was raising his and Sanchez's daughter and two other children Sanchez had from an earlier relationship. When they split up following domestic problems that led to her getting a restraining order against him, Quezada sank into depression, the Paterson attorney said.

"I said, 'Listen, love trumps all. Talk to her.' He called me on Valentine's Day — ecstatic — to tell me they were moving back in together."

In the days after Quezada claimed the $338 million prize — then the fourth-largest U.S. lottery jackpot — he was pictured beaming with his arm around Sanchez and a child. Soon after, they moved out of their Passaic apartment near the Passaic Street liquor store where he bought the winning ticket and sold or gave away their neighborhood grocery.

By November, Quezada, a 46-year-old immigrant from the Dominican Republic, had bought a home in Clifton, and Sanchez was out of the picture, suing him for a share of the millions. Quezada chose a lump-sum payment of $211 million and took home $152 million after taxes.

Sanchez, who had custody of their daughter after the breakup and had filed a complaint against Quezada seeking child support, seemed unlikely to prevail in the lawsuit asking for a share of the Powerball jackpot.

During a hearing on the lawsuit in January, Quezada's attorney, Jonathan W. Wolfe of Livingston, argued that Sanchez had no legal right to a portion of the jackpot because it was based on palimony — compensation for an unmarried partner after a breakup — which has been struck down by state courts in recent years.

Under those rulings, couples who were not married but shared their lives like married couples must have an agreement in writing as to how their assets are to be shared for either partner to have legal standing in court.

However, Sanchez's lawyer, Michael De Marco of North Haledon, maintained during the hearing in January that Sanchez was not relying on the 10 years the couple lived together, or even the child they had together, in claiming she was entitled to a share of the winnings.

Instead, De Marco argued, the couple had what amounted to "joint venture" — their shared ownership and responsibilities running a Passaic grocery store.

De Marco said that the couple had a long-standing agreement that each week they would share the purchase of a lottery ticket. What's more, he said, there was a written agreement between Sanchez and Quezada stating that she is entitled to a share of the winnings.

The proceedings had not yet reached the point at which the attorneys presented their evidence, and no agreements had been submitted to the court.

Sanchez did not accompany Quezada to collect the check from the Lottery Commission, but she relied on that agreement and trusted he would subsequently abide by it in giving her a share, according to De Marco.

Wolfe countered that there was no "joint venture" because the couple were not "running a business together to buy a lottery ticket."

De Marco had sought unsuccessfully to freeze Quezada's bank accounts and assets, claiming that he was burning through the money so quickly that nothing would be left if Sanchez won her lawsuit. According to court records, De Marco claimed that $57 million had been sent to the Dominican Republic; $5 million has been given away; $300,000 was spent on a home in Clifton; and $20 million couldn't be located.

The lawsuit filed by Sanchez was the most recent controversy in Quezada's life. When he won the jackpot, the father of five owed about $30,000 in back child support, which he paid before claiming his lottery prize. After he moved to Clifton, his old neighbors on School Street accused him of reneging on a promise to help them by paying their rent, and a contractor sued him for $3,750, claiming he didn't pay for renovations to his new home.

NJ $338 million Powerball winner and ex-girlfriend in court over moneyNov 10, 2013

What a bad idea if they are back together.  I'd consider her a LIABILITY in capital letters.  I'd be afraid to live with such a person after what just happened.  Afraid I might end up dead or lose all my money to him/her.  All it takes is a crafty and evil setup and you are done.

Delighted to see they are back together for the child's sake.
Reconcilation only works if you really work at it.
Amicable decisions should be made in all financial decisions.
Meaningful discussions about being responsible role models.
Are you kidding me about not having paid your recent debts ?

What a bad idea if they are back together.  I'd consider her a LIABILITY in capital letters.  I'd be afraid to live with such a person after what just happened.  Afraid I might end up dead or lose all my money to him/her.  All it takes is a crafty and evil setup and you are done.

this will be on the next on curse of the lottery

Maybe she can make it snap, crackle and pop, in the bedroom, and poor Pedro had images of them doing the lambada dancing in his head all this time.  Maybe they just found out they truly love each other in a psycho-dating kind of way. Maybe he is just plain ol' pu$$y-whipped. That's a lot of maybes and I pray that all these maybes do not culminate in, maybe he ends up dead in a fishy scary kind of way, and broke as hell to boot. Maybe it works out for them in the end and everybody starts singing, Kumbaya my love kumbaya .....

Wonder if she will she sue him again if they break up?

Boy do I hope she's sincere because the timing of this reconciliation smells fishy.

Good luck to both of them.

This is a tricky one, but i'm rooting for these two. These things happen. I think they probably love each other but they were simply suffering from what people with money suffer from all the time, especially people with new money. That is, In the past when they had an argument or a fight, they would simply make up afterwards beacuse all they had were each other. Now money was in the mix, and they felt money was all they needed, not each other. Financial security has a funny way of distorting people's priorities.

Hope they think about getting married and give it a good go.

...and the greatest of these is love.

Delighted to see they are back together for the child's sake.
Reconcilation only works if you really work at it.
Amicable decisions should be made in all financial decisions.
Meaningful discussions about being responsible role models.
Are you kidding me about not having paid your recent debts ?

I was wondering about the unpaid bills part as well. But as you know, when you are a big lotto winner everyone wants a piece of you. It wouldnt surprise me if these accusations aren't part of the run of the mill vultures trying to sue for whatever they think they can get their hands on.

Congratulations to the couple.  I think he did right.  They had been together for over 10 years with kids not to mention she helped him run a business.  If all that don't count for commitment and love on her part what does.  He probably was having visions of playboying around but came to his senses either on his on or a dad, mom, aunt, uncle explained it to him.   No one else he was going to find was going to be after him for love.  It's to bad he put her, the kids, and himself through that emotional rollercoaster.   They should go on a two month trip around the world to forget and rekindle.

They were a couple " before" his JP win- why make money come between them now, huh?
All is forgiven. I just love happy endings- don't you?

Hope they make it work, life is to short to fight over money. 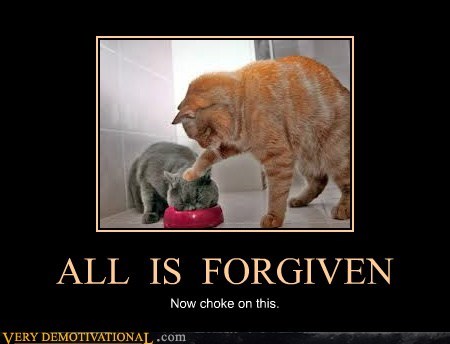 I didn't see this one coming.