Is your state the latest to add a $50 scratch-off?

Lottery players are seeing the dawn of a new era in the lottery industry where $50 scratch-off tickets are now becoming the most expensive games one can reach for at a lottery retailer.

More of the most expensive scratch-off tickets yet are making their way to retailer shelves across multiple states, and players will have to shell out some serious cash for these.

Among the jurisdictions who recently announced the next-highest price point ticket are Florida, Pennsylvania, Arizona, and Missouri. Other states currently offering $50 scratch-offs include Colorado, Indiana, Minnesota, and Oklahoma, but typically the most expensive ticket a lottery offers costs between $20-$30.

The Texas Lottery was the first to launch the nation's first $50 scratch-off in 2007, called "$130 Million Spectacular" and featured over $133 million in prizes with three top prizes of $5 million and six $1 million prizes.

Just this year, Texas also celebrated its highest-selling $50 scratch-off game in its history, just based on sales in the first ten weeks alone. "Casino Millions," which launched in September 2021 and offers over $250 million in prizes including top prizes of $5 million, surpassed $143 million in sales last month.

With those figures and the fact that scratch-off tickets account for a huge majority of lottery sales, it's no wonder that state lotteries are looking to capitalize on the bread and butter of their product portfolio by offering more instant games at higher price points with juicier top prizes.

The Florida Lottery, for example, is expecting the introduction of their first $50 scratch-off, "500X The Cash", to excite players and electrify sales.

"We expect the $50 to bring in around $27 million per week through the first six weeks," Florida Lottery Secretary of Product & Sales Justin Rock said.

"500X The Cash" is coming soon to Florida retailers on February 28. According to the Lottery, the game's launch is timed to coincide with its peak selling season.

"In Florida, we traditionally see a dip in sales right after the holidays are over," Rock explained. "This pattern seems to indicate a contraction in discretionary spending right after a period where consumers are, what I like to call, 'buy fatigued.' Around the end of January, and peaking the second week in March, we get an influx of tourists that help boost our sales. We strategically plan our strongest game family each year to coincide with this pattern to take advantage of the increase in participation."

Florida's $50 scratch-off will feature the state's largest top prize ever offered in any of its instant games at an eye-watering $25 million. However, there are no $50 "break-even" base prizes, with the lowest-tier prize starting at $100.

The Arizona Lottery has also jumped on the $50 ticket bandwagon, having released its first $50 scratch-off game at the beginning of the year. The ticket, simply called "500X," offers a top prize of $5 million as well as the largest retail commission of any instant game in the Lottery's product offering.

If the $5 million top prize is not enticing enough, the ticket offers overall odds of winning a prize at 1 in 2.51 with a minimum prize of $50.

The Pennsylvania Lottery is celebrating the number 50 this year. The launch of its first $50 scratch-off on December 28, 2021 is right in time for its 50th Anniversary, commemorated on March 7, 2022.

The $50 instant game, called "$5 Million Money Maker," offers a $5 million top prize and blew sales out of the water just within the first week of launch.

"In addition to the $50 ticket called '$5 Million Money Maker,' in March we plan to launch the $30 'My Three Million' scratch-off," Sparks continued. "We're also offering another licensed property coming up in April, the $20 ticket '$1 Million Price is Right.'"

Finally, the Missouri Lottery is the latest to have added a $50 scratch-off ticket to their lineup, having released the game called "Millionaire Blowout" on January 31, 2022. This ticket offers an 80% prize payout and is estimated to generate an average of about $2.6 million per week over a 26-week period.

They're pulling out all the stops to make sure Missouri residents know about the new game, including digital advertisements on multiple streaming services and promotions on social media platforms.

Scratch-off enthusiasts might also be pleased to know that the $50 ticket will also count toward the Lottery's monthly scratch-off drawings and will be eligible for rewards in the Lottery's players' club.

"Formerly, the drawings included only the $30 games, and now with the inclusion of the $50 game, we are branding the drawings as 'Scratch Big, Win Big' monthly drawings," Missouri Lottery Promotions Manager Tyler Luetkemeyer said. "Players receive one entry for every $10 worth of $30 and $50 games in a monthly drawing for 10 winners of $500 cash."

It is common for state lotteries to track the "experiments" of other state lotteries before trying out new games and features themselves. Based on the success of $50 scratch-off lottery tickets where they have been tried, it would not be surprising to see this trend continue spreading to other states.

What do you think of this trend? Would you buy $50 scratch-off tickets, and if you did, how often would you buy them?

Lottery scratch games still being sold after jackpots are goneJun 30, 2008

Some States Consider Leasing Their LotteriesOct 16, 2007

We've had $50 scratchers in Indiana for a minute. Every time I buy one and it doesn't pay out I kick myself for not buying fifty Pick 4 quick picks. Basically, you are paying $50 for the warm fuzzy feeling while scratching the ticket.

They used to have one in ny now they have like 4. No 2 dollar tickets can't afford dem hahs. It's never enough haha

You have to be crazy to waste $50 on a scratch off.

I wouldn't be surprised if Massachusetts brings out a $50 ticket in a couple of months - April is already the month in which they bring in a new $30 ticket (the current most expensive amount), and this year April marks the Lottery's 50th anniversary.

Of course, having now said that, watch me end up with egg on my face.

Just another example of the next money grab by greedy lotteries. It wasn't enough that the price of high jackpot games went to 2$ per game, and the minor prizes are chintzy. Also the missed jackpots don't climb up like they used to.Will the prizes of this higher scratch off be commensurate with the purchase price? I doubt it

You have to be crazy to waste $50 on a scratch off.

Purchasing a $50 scratcher is not for the faint of heart!

You've Got to Ask Yourself a Question: Do I Feel Lucky?: Well, Do Ya, Gambler?

Gambling: An enterprise undertaken or attempted with a risk of loss and a chance of profit.

Was just talking about this down @ the store.   I don't play scratch tickets very often and no way have I ever, nor will, buy a ticket over $10.00

So a young lady buying gas, coffee, pastry and a donut.   She didn't have enough money for the donut so told her I'd get it for her since she was nice to my coon/fox hound dog in the store.   The total for my stuff came to $7.14.   Turned on the telly to LMAD and lady played 147...so you can imagine what I played for pick 3 for mid-day five days!  The postal code from home is 01746, so played 0174 str/box five days too.

Everyone should look at the particular product's table of odds/prizes before judging if $50 scratchers are too crazy. This is the odds/prize table for Oklahoma's $50 scratcher by way of example. 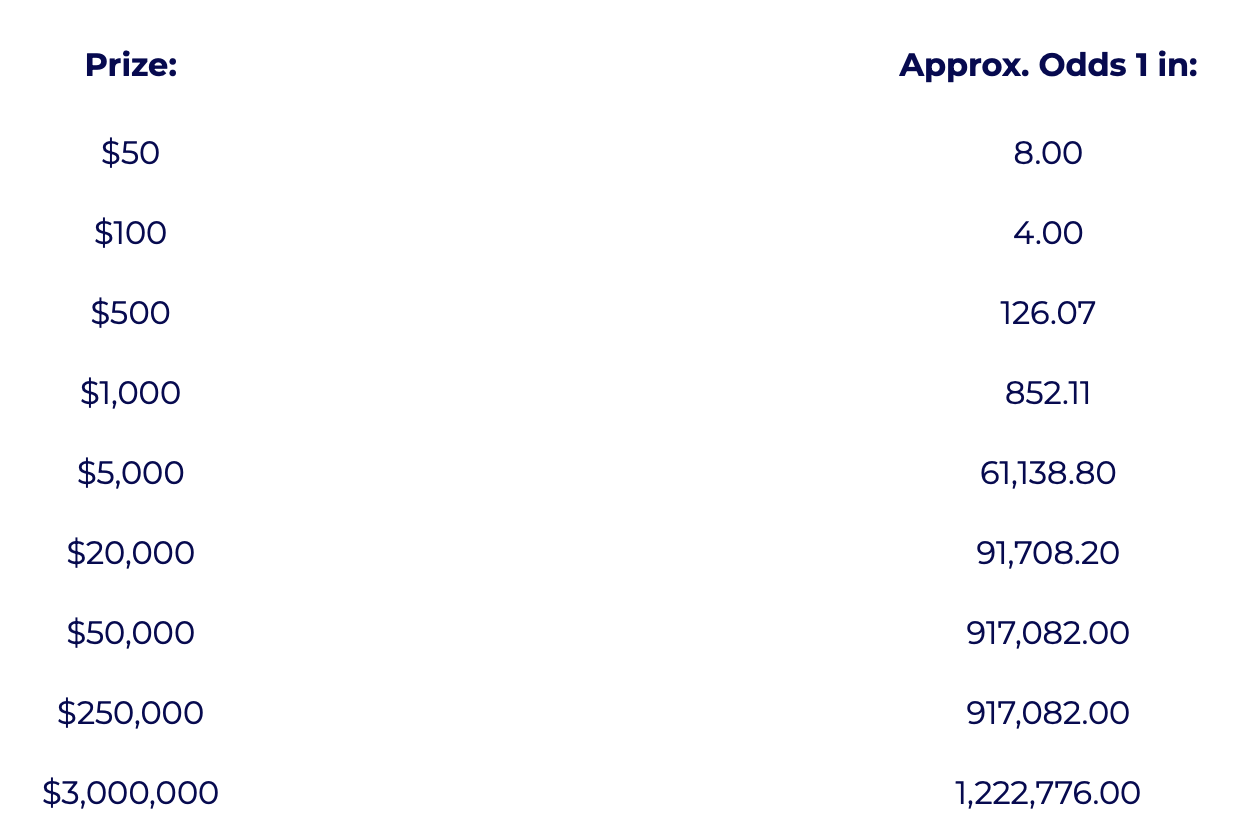 The overall odds are stated as 1 in 2.6. There's a 1 in 8 chance of breaking even, and a 1 in 4 chance of doubling your "investment." Personally, it's not my thing, but it's not nearly as bad as it sounds at first.

Good luck to anyone ballsy enough to buy one!

Edit: Image seems not to load, so here's the link https://www.lottery.ok.gov/play/scratch/380077