Is the lottery shortchanging schools?

According to the North American Assoc. of State and Provincial Lotteries, 42 states and the District of Columbia run lotteries, and more than half claim the games boost funding for education.  But CBS News chief investigative correspondent Armen Keteyian found that lotteries aren't exactly providing a windfall for schools.

If you listen to state lottery ads, we're supposed to believe that all the numbers are supposedly adding up to more and more money for education.

Lotteries help, but not nearly as much at you may think.  A CBS News investigation has found lotteries generally cover only a fraction of state education spending.  For example, in Illinois, where the state spends $6.5 billion a year on education, only $619 million comes from the lottery.  In California, with an $84 billion education budget, the lottery funds only about $1.2 billion.

"We thought that it would be a windfall" says Michael Johnson, executive director of the Illinois Association of School Boards. He says the idea that lottery money adds to education funding is a myth.

"The general public — they were fooled by this," he says. "The belief that that's additional money, above and beyond what we would normally get, that's the part that's not true."

"Well, it's certainly one of the worst votes I ever made," says former Illinois State Rep. Dawn Netsch.

Netsch, whose vote helped pass the Illinois lottery in the 1970s, says lottery money simply replaces tax dollars legislators might spend on education, but instead spend on other projects.

"The lottery becomes part of the big pot of money that funds the basic functions of state government," Netsch said.

In fact, Keteyian's investigation of government spending in the 24 states that dedicate lottery funds for education, yields a stunningly bad report card: The percentage of state spending on education is down or flat in 21 of those states from coast to coast.

Down, for example, in the following states: Washington (-6 percent), New York (-5 percent), Missouri (-4 percent). It's down 3 percent in Florida, Illinois, Ohio, and Michigan; Montana (-2 percent) and Texas (-1 percent).

"Lottery dollars are revenues that the states would not have otherwise," says Tennessee Lottery president Rebecca Hargrove.

Hargrove has run the lottery in Illinois, Florida, Georgia, and now, Tennessee. She argues things would be even worse without lotteries, and that they are more popular than raising taxes as a way to increase the education budget.

"In many of these states that we've looked at, it's gone down or it's flat," says Keteyian.

"What you'd have to know, which is impossible for you to know, is how many dollars education would have gotten if there weren't lottery dollars," says Hargrove.

"Lawton Childs, the former governor of Florida, [had] a quote you're familiar with... He called the lottery 'A great hoax on the people,'" says Keteyian.

"The lottery's job is to raise as many dollars as possible, as responsibly as possible," says Hargrove.

"Many people, at least, still think of the lottery as being sort of an add-on, a supplement," says Netsch, who now works at Northwestern Law School. "It never was that. It was a shell game from the beginning."

A game, it appears, in which the big winners are not in the classroom.

Lottery scratch games still being sold after jackpots are goneJun 30, 2008

Some States Consider Leasing Their LotteriesOct 16, 2007

Tennessee changed over in August.  I will be interested to see what their first quarterly report looks like in October.

Tennessee changed over in August.  I will be interested to see what their first quarterly report looks like in October.

Getting commentary from Rebecca Paul Hargrove regarding lottery proceeds is akin to getting crimestopper stats from O J Simpson...

It's not the lotteries that are shortchanging the schools, it's the states' practices of "voodoo" accounting.

Let's say a state lottery raises so many millions for the education fund. The state then takes out that much or more somewhere else in the education budget.

Yes they are, because their pig executives are taking too much off the top for their already overinflated salaries. That means more vacations for them. 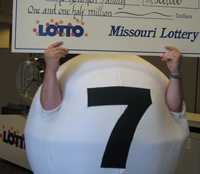 There's only a few states that have lottery "corporations" where the CEO has a fat salary.  Most (the oldest) are state agencies and the salaries pale in comparison.

I think it's important to remember that most funding is designated or appropriated by state legislatures.  If they didn't have lottery funds, it would mean more taxes or cuts elsewhere.

There's only a few states that have lottery "corporations" where the CEO has a fat salary.  Most (the oldest) are state agencies and the salaries pale in comparison.

I think it's important to remember that most funding is designated or appropriated by state legislatures.  If they didn't have lottery funds, it would mean more taxes or cuts elsewhere.

No, it would just mean more taxes.

Politicians don't know how to cut anything but a piece of the pie.

"Is the lottery shortchanging schools??"  The short answer is HELL NO.  But to dig deeper into the issue, everybody knows that the fools, crooks and the clowns in charge are to blame.

If you don't already know, this COUNTRY 'TIS OF THEE is in a royal HELLIFIED MESS.  Our so-called "leaders" have taken us all for the ride of our lives.  DO NOT be fooled, people.  This economy of ours is a SHAM.  And they know it. But do they care??  "HELL NO!!"

All these money grubbers care about is grabbing all they can get their dirty little hands on.  I, for one am fed up with all the waste, fraud, lies and total corruption.  It's high time for indictments, prosecutions and lengthy prison sentences for all the PERPS.

So don't blame the lotteries themselves for falling short.  The way I see it is, the days of reckoning are approaching POSTHASTE. What will they do when the times get tight and funds get ever so scarce?